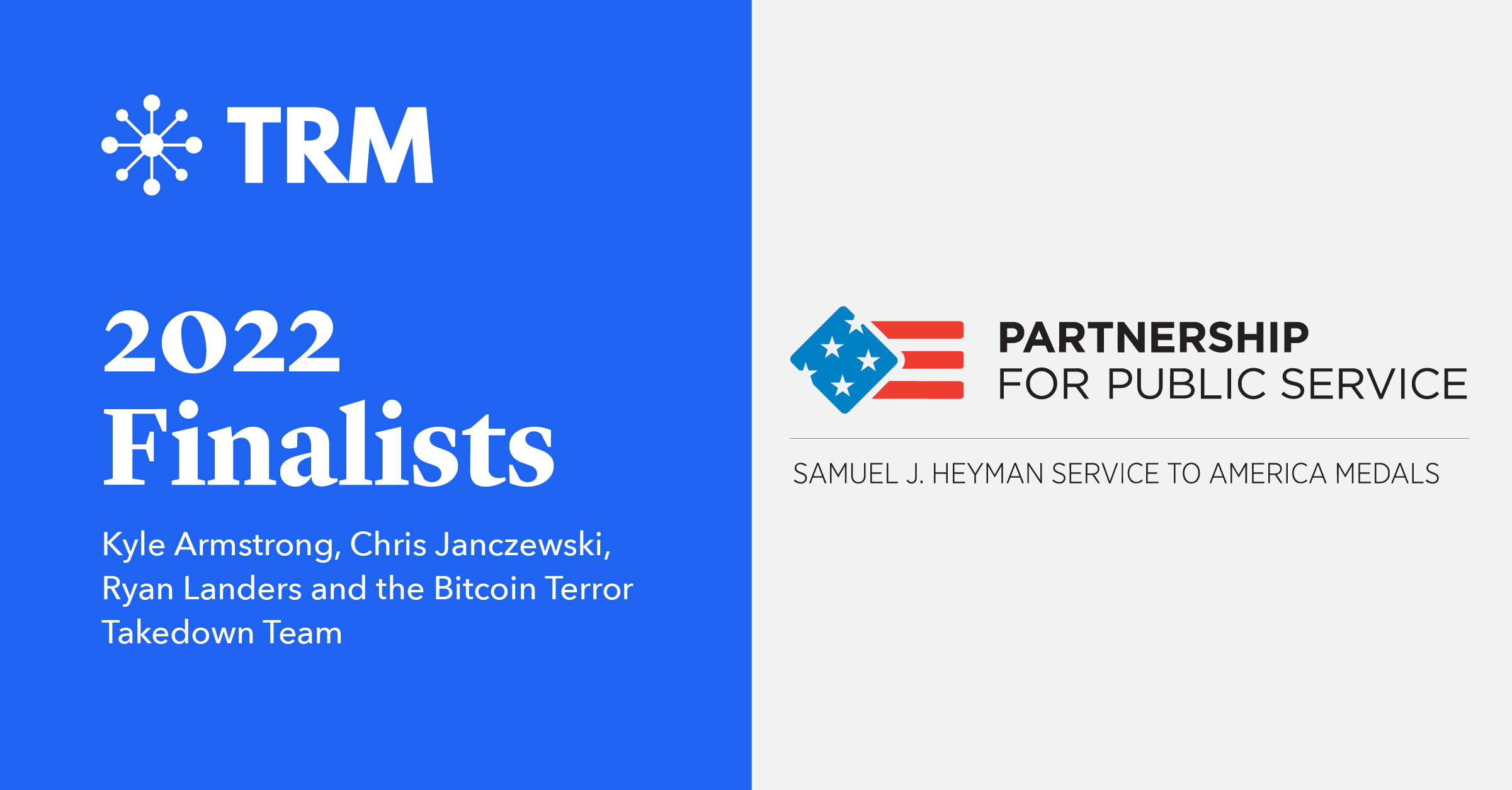 In August 2020, the United States Department of Justice (DOJ) announced the global disruption of three terror financing campaigns and the seizure of cryptocurrency accounts associated with terror groups al-Qassam Brigades, Hamas’s military wing, al-Qaeda, and Islamic State of Iraq and the Levant (ISIS).  The actions, which represented the government’s largest ever seizure of cryptocurrency in a terrorist financing context, brought together investigators from across U.S. law enforcement agencies.

The team was led by then FBI Special Agent Kyle Armstrong, now Director of Law Enforcement Relations at TRM, then IRS-Criminal Investigation Special Agent Chris Janczewski, now Head of Global Investigations and Homeland Security Investigations Assistant Special Agent in Charge Ryan Landers. Yesterday, this team was named a finalist for a Samuel J. Heyman Service to America Medal which highlights excellence in the federal workforce and inspires other talented and dedicated individuals to go into public service. The Sammies, known as the “Oscars” of government service, are a highly respected honor with a rigorous selection process highlighting the critical work public service heroes do every day.

According to the DOJ release, the “three terror finance campaigns all relied on sophisticated cyber-tools, including the solicitation of cryptocurrency donations from around the world.” In the first case, the al-Qassam posted a call on its social media page for bitcoin donations to fund its campaign of terror, then moving the request to its official websites. Working together, IRS, HSI, and FBI agents tracked and seized all 150 cryptocurrency accounts that laundered funds to and from the al-Qassam Brigades’ accounts. With judicial authorization, law enforcement seized the infrastructure of the al-Qassam Brigades websites and subsequently covertly operated alqassam.net. During that covert operation, the website received funds from persons seeking to provide material support to the terrorist organization, however, they instead donated the funds to wallets controlled by U.S. law enforcement.

In the second case, al-Qaeda and affiliated terrorist groups, largely based out of Syria, operated a bitcoin money laundering network using Telegram channels and other social media platforms to solicit cryptocurrency donations to further their terrorist goals.  In some instances, they purported to act as charities when, in fact, they were openly and explicitly soliciting funds for violent terrorist attacks.

Finally, in the third case, Murat Cakar, an ISIS facilitator who was responsible for managing select ISIS hacking operations, engaged in the sale of fake personal protective equipment via FaceMaskCenter.com, a website which claimed to sell FDA approved N95 respirator masks, when in fact the items were not FDA approved and the proceeds were being used to fund terrorism.

In all three cases, Armstrong, Janczewski, Landers, and others coordinated to take down the sites and seized over 300 cryptocurrency wallets.

“This team was responsible for the largest-ever seizure of cryptocurrency accounts used by terrorist organizations,” said Gregg Maisel, Chief of the National Security Section of the U.S. Attorney’s Office in Washington, D.C. “These are significant terrorist organizations, and we want to do everything we can to crush their sources of funding.” Maisel said that “cases like these don’t happen by accident,” adding that each of the three leaders “pushed for a new type of unit and a novel approach and were highly creative.”

As highlighted in the Sammie’s release, during the investigation, “undercover Homeland Security agents communicated with the administrator of Reminder for Syria, a related charity that sought to finance terrorism using bitcoin donations. The administrator unwittingly told U.S. agents he hoped for the destruction of the United States and even discussed the price for funding surface-to-air missiles. Federal agents were able to unpeel multiple layers and accounts, tracing donations across 155 cryptocurrency addresses before dismantling the complex terrorism financial effort.”

“The three cases required hundreds of subpoenas and search warrants, undercover activities, thousands of hours of data analytics, and collaboration with numerous domestic and international partners. Armstrong called it ‘a herculean effort.’”

According to the Sammie’s release, “Janczewski, who along with Armstrong recently left government service, said the team broke new ground with its investigation, but added that these cases represent “just the tip of the evolution of terrorist financing.” Landers said the cases should send a strong signal to terrorist groups that “the U.S. government will do everything in its collective power to leverage and embrace creativity and innovation to stop terrorist fundraising in its tracks.”